In the world of disability services, assistive technology has become quite common and, not surprisingly, voice activated capability has become a very useful feature. Last year I shared a conference presentation with a woman who had recently begun using a leading edge device activated solely by the sound of her voice.

Sharon used a wheelchair and had mobility limitations in her arms as well. The device she used was a VoiceIR Environmental Voice Controller (ECU), a multipurpose, integrated device that looked like a tiny black spaceship on the front of her chair. 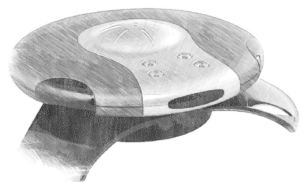 It could be commanded to do everything from opening the front door of her home, to making speaker phone calls, and even running small appliances. Before the presentation, we were talking about family, work and other things when something I said touched on legislation and politics. “Oh, don’t get me started!” she loudly proclaimed. And at the sound of her voice, the little spaceship on her chair immediately lit up and buzzed to life. “Oh, sorry,” she said, more to the machine than to me. “Shut down”, she commanded, and the machine did just that. “I have to be careful”, she told me, “Every time I say the word ‘S-T-A-R-T’, the stupid thing fires itself up. It doesn’t seem to know the difference between what I say and what I mean.”

An interesting phenomenon. No difference between what is said and what is meant, between words and actions. I suppose it’s no wonder we humans would find that unusual. Our words and our meaning are often difficult to unravel. Worse, compared to how we actually think and feel, our words are often meaningless. Is it any wonder that, when faced with words that literally are the actions they represent, we are taken by surprise? Welcome to the living Word.

The simple realization that there is no difference between what God says and what God does is, to me, one of the most profound and comforting truths in scripture, and it is literally the first thing we learn about the nature of God. “Let there be…” and it was. The litany of creation. Words, actions, no difference. “By the word of the Lord the heavens were made.”

The simple truth that God’s activity is, in a sense, ‘voice activated’ does more than take us by surprise. It offers freedom and assurance that turns our world on its head.

I have made you in my own image, called you by name , removed your sins as far from us as the east is from the west, and there is no end to my love for you.