There has been an historic and cultural pendulum when it comes to the relationship between faith and disability. On one side, we have seen archaic notions of people with disabilities somehow cursed or tested. On the other, we have heard that adults with disabilities have a “childlike faith”, or are specifically blessed or honored in some way. There is a problem with perceiving disability among us as either a curse or as a particular blessing. Both are inadequate, because both fail the test of community. The perspectives can also cloud understanding of our own abilities, including intellectual abilities.

It would be helpful to have a new analogy, a comparison that doesn’t rely on age or development alone; like IQ and adaptive skills, something that acknowledges that, for all of us, strengths coexist with needs; something that is given in great measure to some, and small measure to others; something we can all identify with; and finally, something that has a scriptural foundation and come with an acknowledgement that all we have and all we are belong to God.

Such an analogy exists. Money. 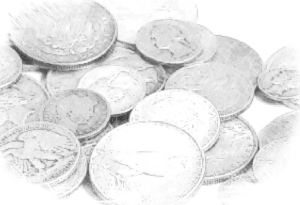 Money, like intellect and other abilities, is but one factor among many in someone’s life and probably isn’t a personally defining characteristic. Some people have great wealth. They may have amassed that wealth over a lifetime of work, or have been born into it through no effort of their own. As far as the rest of their identity is concerned – personality, behavior, personal interests or general health – they are a very diverse group. Someone in that group may be very capable and easily lovable, while another may be egocentric and socially inept. Sounds a lot like intellect.

On the other end of the spectrum, there are people who struggle financially, even to the point of needing outside assistance to live their lives. For some, it may have been a product of their culture, for others, tragic circumstances such as job loss or long-term underemployment. Either way, their financial situation tell us little about them. Again, sounds a lot like intellect.

Each one of us can plot ourselves somewhere on the financial spectrum, and probably know people of greater or lesser means.

This also provides some clues as to how God might regard our intellectual gifts, their use, and what our abilities mean in our relationships with one another. Because, as it turns out, money is specifically addressed in scripture. A lot. It is talked about more than perhaps any other personal characteristic.

In Jesus’ parables, there are examples of both rich and poor people who are, depending on the story, all capable of being wise or foolish, generous or selfish, benevolent or malevolent.   King Solomon, presumably very wealthy, is acknowledged by everyone to be very wise. The rich man in the story of Lazarus (Luke 16) was hard-hearted and paid an eternal price. The poor widow gave her last two coins (Mark 12) and is rightly portrayed as generous, while stories of thieves who, presumably, are also poor abound throughout the Gospels.

Whether the gift is money or cognitive ability, God calls us to be good stewards of what we have been given. Intellect and ability are fundamentally stewardship issues. It’s not about how much we have, it is about being called to respect and use those gifts.

One thought on “Intellect as a Stewardship Issue”