There is perhaps no single issue more on the minds of people with disabilities and their partner advocacy groups than that of employment. This fact alone puts them in the mainstream of American conversation these days.  Everyone, it seems, is talking about jobs.  Among people with developmental disabilities, though, there are a few unique issues demanding our attention.

The professional community in disability support services has a long and unfortunate history of creating artificial environments.  We invented institutions as artificial communities; group homes became artificial families; and segregated vocational centers, sometimes paying pennies an hour, became artificial jobs.  Like outdated residential options, sheltered workshops are slowly disappearing from the national landscape.  According to data released in 2011 by the Institute for Community Inclusion in Massachusetts, there has been a steady decline in “facility-based work” (read sheltered workshops) over the past decade; however, that fact alone is an incomplete picture of what is actually happening.   If workshops are going away, what is taking their place? 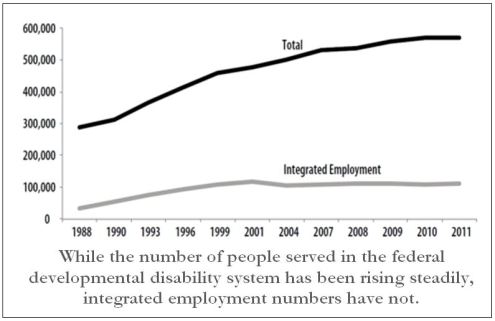 It would be very good news if there was a corresponding upward-trending line in the area of integrated employment.  Unfortunately, that is not the case.  The same 2011 study revealed less encouraging news.  After a relatively brief period of expansion in the early years of supported employment, the movement lost energy.  In fact, the line indicating any growth in the number of people with disabilities in the integrated workforce has remained relatively flat for more than 10 years.

So what is happening to people who are no longer served in sheltered employment? In many cases, little or nothing.  About half of the population of people with developmental disabilities in the study were found doing nothing productive, gainful or particularly meaningful with their days. “Non-work services”, the structured leisure activities and day services that are unpaid, have been increasing for a number of years. That is not a step in the right direction.

Where and why do people of faith enter the story?  Beyond the fact that we are natural points of advocacy for a vulnerable population, a couple of other facts connect us to this specific issue. As the resource, The Call and Opportunity for Faith Communities to Transform the Lives of People with Disabilities and their Communities, states, “Work is both a gift and a responsibility. There are scriptural, theological, and historical understandings in all the major faith traditions that affirm the importance of everyone using their gifts in service to God and community, and the community’s call to make that possible for all.”  Separating vocation (our “calling”), paid or otherwise, from its spiritual basis is practically impossible.  If that weren’t enough, a 2010 study revealed that only 5% of people with disabilities who are working report they used a state, federal, nonprofit, or community-based service provider agency to assist them in finding their current job.  Most of the others utilized their personal networks of family, friends and other connections.  Faith communities are rich sources of those very networks.

Our nation’s current low capacity when it comes to real, individualized employment for people with disabilities presents an enormous challenge.  And, like the challenge of moving from large institutions into the community, it is marked by a need for everything from a broad, philosophical paradigm shift to practical, everyday details and problem-solving.  The demise of sub-minimum wage, sheltered workshops deserves more than our shallow celebration.  It deserves our best thinking toward real solutions and our best partnership toward more meaningful and productive lives.  This is a complex issue, of course; but in the end, the only lasting differences will be those that are born from authentic relationships.