On March 13, 1964, Kitty Genovese was stabbed to death outside her apartment building in  Queens in New York City. The New York Times published a report that described a scene of indifference from neighbors who failed to come to Genovese’s aid.  The report claimed that at least 37 witnesses (a number later disputed) saw or heard the attack yet none came to her aid or even called the police. The incident led to an understanding of a phenomenon known as the bystander effect or “Genovese syndrome”.  Specifically, it refers to incidents in which people offer no help to a victim when other people are present.  It turns out that the greater the number of bystanders, the less likely it is that any one of them will help, a relationship known as diffusion of responsibility, i.e.,  everyone else will certainly take action, so I don’t need to.

But people do not take action.  And evil triumphs.

I think of the Bystander Effect when I consider an issue that has been widely reported for many years.  I find myself wondering, “How is it that so many people know that about this, and yet, nothing has happened that would stop it? 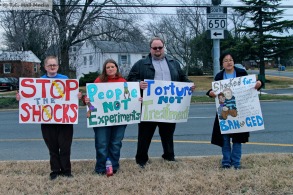 The Judge Rotenberg Center (JRC) is a residential facility in Canton, Massachusetts, known for its use of aversive treatments applied to children and adults with developmental disabilities and behavioral disorders.  JRC is the only organization in the US that uses a device that applies strong electric shocks to the skin as “treatment”, a practice that has drawn criticism from educators, governmental bodies, and disability rights and human rights groups. Yet, it goes on.

Do not be confused.  This is no innocent therapy.  It is the application of strong electric shocks to the skin by means of a Graduated Electronic Decelerator (GED) with the intended effect of causing pain.  How much pain?  You be the judge.  This news report shows unfiltered surveillance video of the procedure.  It is both graphic and disturbing, and know this: Once you have seen it, you are a witness. In effect, you are on a New York street corner in 1964, watching something terrible unfold.

What do first-person witnesses have to say? Interviews published in a 2010 report by Disability Rights International are sobering.

“One girl who was blind, deaf and non-verbal was moaning and rocking. Her moaning was like a cry. The staff shocked her for moaning. Turned out she had broken a tooth. Another child had an accident in the bathroom and was shocked.” – a former JRC teacher

“I got the shocks for swearing, saying no, leaving a supervised area without asking and even for popping a pimple – any non-compliant behavior. I had one [electrode] on each arm, one on each leg and one around my waist. It is the worst pain, like a third degree burn. They tell people it feels like a bee sting but they lie.” – a former JRC student

“One kid, you could smell the flesh burning, he had so many shocks. These kids are under constant fear, 24/7. They sleep with them on, eat with them on. It made me sick and I could not sleep. I prayed to God someone would help these kids.” – a former JRC teacher

“One time I was visiting my son and I saw the other students with the backpacks [containing the GED] on. It really pained my heart. One child got a shock and then the others started to scream and cry. They were scared, and they were cringing. They were waiting for their turn.” – the mother of former student

All submissions received must include the Docket No. FDA-2016-N-1111 for “Proposal to Ban Electrical Stimulation Devices Used To Treat Self-Injurious or Aggressive Behavior.”

I’ve referenced this quote from human rights activist, Arundhati Roy before.  “The trouble is that once you see it, you can’t unsee it. And once you’ve seen it, keeping quiet, saying nothing, becomes as political an act as speaking out. There is no innocence. Either way, you’re accountable.”

We are no longer bystanders.